I do not know all the battles that Kelsang Gyatso has faced.

I can think of 7, which have been researched and reviewed the last 7 years on nktworld.org and based on hundreds of credible sources, including his own statements. 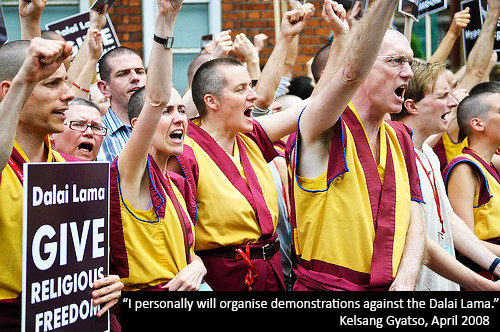 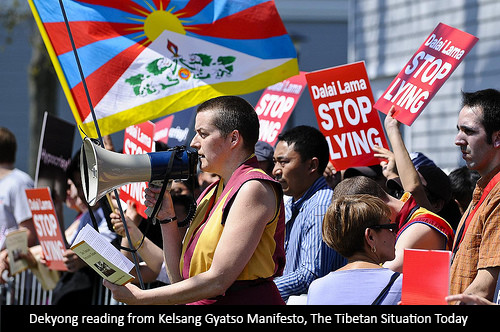 Now, NKT, an international business headquartered in England and worth about $50 million is determined to swat away nktworld.org, an un-promoted web site that Alexa ranks at 19,120,007 and Google values at $81. The web site began July 2008. NKT claims that nktworld.org is "vile", though it largely is about the vile political campaign of Kelsang Gyatso that he publicizes around the world.

As Kelsang Gyatso moves against this web site's owner August 2015, I wanted to share a glimpse into who I am while I can. Religious and political extremists can be hazardous to health as we are increasingly reminded. Followers that NKT sends to protest rallies have shown themselves to be hostile. According to police, Shugdenites killed 3 monks close to the Dalai Lama during NKT's first wave of protest rallies around the world (presumably not directly related NKT, the leading organization of Shugdenites). Cults cultivate 'lone wolves', too often resorting to violence.

Buddhism is foremost about compassion.

My epiphany happened July 1968. Extensively broken and lacerated by a head-on motorcycle accident, I was mostly unconscious for 8 days before the realization that I was going to live, then sending me to surgery to remove my leg, though finding that it could be mostly saved. Over the next few weeks, I learned the infinite values of friends, truth and that I am nobody without helping others. I have since been dedicated to saving lives and resolving injustices.

Some of my efforts made international news, including well received documentaries on 60 Minutes and BBC about those I was helping. I toured the country promoting the benefits of disease self management skills. My government testimonies and peer-reviewed publications had significant impact. Two product benefits I developed saved many lives, the benefits known to everyone. My opinions in thousands of lawsuits always met Frye/Havner/Daubert rules of evidence and have assisted hundreds of thousands of victims and removed many dangerous products from the market. I worked a few years toward several criminal investigations, court judgements and a significant consent decree issued by the Federal Trade Commission against a corrupt corporation generating 5,000 complaints/week for product, credit card and check fraud. The product caused many heart attacks and strokes, and the company closed. (this company made many threats against me; in the end, the FBI reminded me that I had First Ammendment Rights and the company and its lawyers agreed that the campaign was fraudulent and that they would never do this again; the company ceased and lawyers left their law firm; similarly, a federal judge promised severe punishment of a lawyer if that lawyer lied about me again, that lawyer, with his own defense attorney, left the case) My work produced several other fraudulent company closures.

My work has appeared in thousands of press reports the last 37 years.

My work has never been about me. I was only a conduit. I regret, however, not being able to do more.

I have been living Buddhism for 65 years, although I did not recognize this until 1974 during conversations with a brilliant mentor during graduate/medical school, where I explored mathematical and physiological aspects of spirituality. Prior to this, I attended Catholic grade school, high school and college, was an active alter boy, sang in choir and nearly entered the seminary. I often served on symposia and gave seminars regarding comparative theology.

My study of Buddhism included reading hundreds of books about Buddhism, including all of Kelsang Gyatso’s books. I attended programs and meditations at various schools of Buddhism, particularly in Manhattan where I could explore readily the many different approaches to Buddhism. I resonated most with kinetic meditation and active kindness when alone and with silent meditation and stillness when in groups.

Recurring themes and quiet meditation taught me that ego is like a hand. It can be a great tool and when careful, positively inspire and energize us. However, ego is not everything. And, it can lead us into narrow motivations and down destructive paths because its myopia attaches significance to a narrow range of experience and potential. Ego is the opposite of spirituality.

I do not wear Buddhism. Only a few know of my involvement. No one knows of my life-long inspiration – to personally sacrifice for the benefit of the many. It is not Buddhism if you are not doing everything you can to benefit other living beings.

In 2008, I was stunned by NKT’s evasion of my questions about Kelsang Gyatso’s long battle with the Dalai Lama and banning all books from esteemed Buddhist Lamas, even 100+ classics and modern books effectively transcribing Buddha Shakyamuni’s direct teachings. Buddhism originated with Buddha Shakyamuni in India about 2,500 years ago.

I then learned about the deluge of Internet reports, press coverage, journals and books for about 10 years about NKT extremism, both of which have gown substantially since, and that many NKT practitioners were victimized, sometimes severely. I learned that many victims were truly scared long after leaving Kelsang Gyatso.

In 1996, Kesang Gyatso's training ground, Sera Je Monastery, found his NKT to be a cult.

"...These days, [in Kelsang Gyatso] the demonic cloud of overwhelming arrogance displays itself with a mass of deluded pride...Kelsang Gyatso who is today a pariah in the Tibetan community...(he) launched a blistering attack on the Dalai Lama in the name of 'religious persecution' along with his gullible followers...we are in no doubt that he will in fact be the one who goes to hell...What's more, if any one disagrees with his 'pure' cult, he gets the boot...In his apparent ecstasy, he even disowns being a Tibetan and works against the very people where he was born...This means that we request all of our brothers and sisters, the Tibetan people inside and outside Tibet, to completely sever any relationship with him."

In 2014, the Inform charity reported... "Inform has concerns that those becoming involved with the NKT-IKBU are not fully aware of the controversial status this group within the wider Tibetan community. Those new to Tibetan Buddhism are unlikely to have an educated understanding of complex and contested history of the figure of Dorje Shugden in Tibetan history and theology." (Inform is an independent charity that was founded in 1988 with the support of the British Home Office and the mainstream Churches with the aim of obtaining and making available objective and up-to-date information about new religious movements or 'cults'.)

July 2008, though before I was banned, I began nktworld.org. I thought that this was the reason that I was banned by NKT in 2009. I even asked Kelsang Dekyong about the controversies I was learning about to no avail. Maybe this is why I was banned, after 5 years of contributions, including about $5,000 and sponsorship of a monk traveling to an NKT festival.

Unlike NKT, this web site has no funding, no affiliations, no memberships. No government subsidies. No rental properties and vacation packages. No music CDs. Nothing for sale. No mansion, temples or retail outlets. This web site is simply a vehicle for NKT participants, for and against, to share credible experiences and for reporting various published analyses and peer-reviewed journals and books. Many profound teachings from Great Lamas are discussed and recommended.

After knowing about this web site for 7 years, Kelsang Gyatso demanded last week that nktworld.org goes away. Not a worthy quest for a Buddha as NKT advertises that he is.

Why would the attorney filing complaint against nktworld.org support a client, Kelsang Gyatso, who maliciously calls the Dalai Lama a Nazi, Marxist, dictator, murderer, hypocrit, human rights abuser, traitor, evil, Muslim, cruel, pig, liar, false Dalai Lama, spiritual con man, one of biggest scams of the century, corrupt politician and CIA agent? The Dalai Lama, now 80, was awarded the Nobel Peace Prize and is admired by billions around the world and virtually every government and religious organization but Kelsang Gyatso and NKT. Why would this attorney support a client against Tibet, Tibetan leaders, 6 million Tibetans, Tibetan Buddhism and NKT victims? Shameful. Are billable hours, possibly $300 or more per hour, really worth it?

Contrary to Kelsang Gyatso's vehemence against Tibetan Buddhism and its millions of practitioners, it is a beautiful human legacy that must be preserved. It is not to be replaced by NKT as Kelsang Gyatso wishes.

Just the opposite is professed by Kelsang Gyatso who engineered a political system that is marketed through manifestos, protest rallies and the Internet against Tibet, Tibetan Buddhism and the Tibet Government in Exile and their leaders. Kelsang Gyatso formed a cult focused on self.

At NKT, developing ego is everything (a reason why many crash when they leave NKT) and the great Tibetan Lama Tsongkapa (1359-1419) is little more than a word in a song (he was the most prolific author in Buddhism, but his writings are banned inside NKT). All of NKT's bans are a very sad tragedy.

I was initially inclined to do great things for NKT, but learning the truth about Kelsang Gyatso's battles and extremist politics compelled me to leave and work in other ways to serve others.

There are countless receptive living beings to help. Please join this cause. Everyone will benefit.

Kelsang Gyatso has two faces in his business model.

The pleasant face is a convenience store for 'Buddhism'. Products and services are effectively marketed and NKT's real estate holdings and retail outlets have grown rapidly from the revenues, bolstered by taxpayer subsidies.

While not to be confused with mainstream Buddhism, NKT has fulfilled a market niche in this frenetic world where bartered promises of easy peace and enlightement have strong appeal. NKT provides peaceful meditation venues, often a coffee shop, rental rooms, seminars and an array of branded books, CDs and artwork. I enjoyed these offerings for 5 years - because of the convenience of a nearby NKT center (for serious exploration of Buddhism, I went elsewhere).

It is this face that I supported before a government agency in 2005, 3 years before I learned of the other face. Like everyone, I was duped.

Kelsang Gyatso also markets a vitriolic political face, projected around the world in the form of angry protest rallies and blistering Internet attack against the Tibet Government in Exile, Tibetan Buddhism, their political and religious leaders, and anyone who disagrees. Feeling exhaulted by Kelsang Gyatso's authorizaton and NKT resources, NKT followers yell and raise anger fists - visually and rhetorically. Kelsang Gyatso throws students disagreeing with this vitriol out of their government-subsidized housing at NKT centers and then attacks them on the Internet. He threatens lawsuits and caustic proceedings with ease.

As many have asked who hear about Kelsang Gyatso's vitriol, "Why is a religious organization doing such a thing?"

Most everyone shuns this vitriol, particularly 6 million Tibetans, the Tibet Government in Exile, true Buddhist organizations, Buddist Lamas, NKT victims and the press. And, sadly for the meaning of Buddhism, to anyone walking by an NKT protest or watching news coverage.

This web site's purpose has been since July 2008 (from home page):

"... a heart-felt plea that Gyatso, his NKT cult and his spiteful devotees relinquish their offensive public ego display and their abuse of esteemed Tibetan teachers of Buddhism...and others. Show the world compassion, not militancy."

Unfortunately, seemingly out of desperation, Kelsang Gyatso rationalizes his vitriolic face with his pleasant face, asserting - in effect - that his vitriol against us is mainstream Buddhism.

This is why there has been so much coverage of Kelsang Gyatso and NKT for at least 20 years. Anyone not swept up by his cult inately knows something is wrong.

A small collection of this coverage is assembled in this web site.

Ultimately, Kelsang Gyatso will see that he was at war with himself, detouring many in the process.